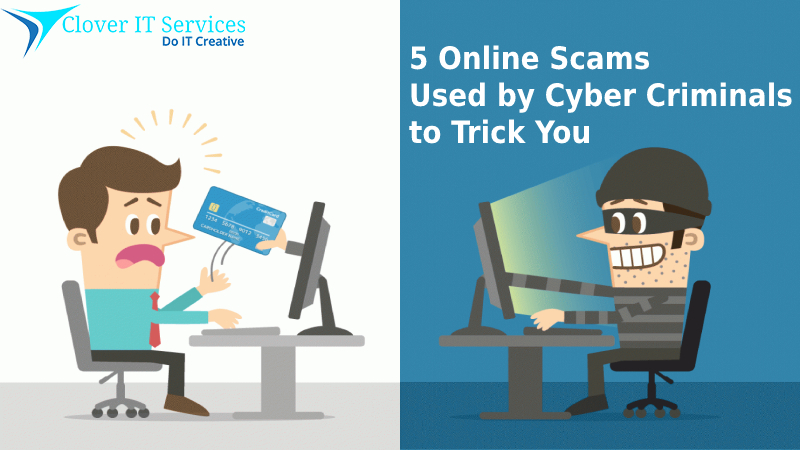 As we are progressing towards a more powerful economy, whereby, every individual has access to internet services, and one can access any information with a single tap, network security has become a very important concern for all! Likewise, if we start preparing a list of some of the most common online scams, then, we would keep adding to it and it would never end! Taking this discussion ahead, here we will be talking about the five online scams used by cybercriminals to trick the users, and in addition to this, we will talk about some of the best data scientists in India, who can help you secure your business.

What are some of the major Online Scams?

Cyberattacks which are defined as security threats to the user data, log files, and other such sensitive information, is quite common these days, and here is a list of the five common online scams that justifies the need to hire a data scientist, who can take care of all these things:-

Phishing is one of the common cyberattacks, where the attacker tricks the user to click a malicious URL and other times tricks them into downloading an attachment, which eventually exposes all the user data to the attackers and gives them complete access to all the sensitive and confidential content. Likewise, in the year 2018, across all the cyberattacks, around 83 percent of attacks were Phishing attacks.

Among all the cyberattacks, one of the most severe ones is the Distributed Denial-of-Service (DDoS) Attack, which eventually disrupts the regular website traffic and puts the website offline by hitting the network, system, and server, with excessive access requests. This cyberattack generally serves two purposes for the cyberattackers, which are seeking revenge from an organization and create instability in the system. However, this can be prevented by seeking data security services from some of the best data security companies in India, who can regularly test the IT infrastructure of the organization, so as to track such suspicious activities within the applicable timeframe and secure it well in advance.

Across all the online scams, this one is the most common scams, which has been prevailing these days across desktop and mobile devices. It primarily aims to develop fear among the users that their system is infected with a virus and asks them to download their security software. Once the users fall under their trap and install the asked software, the installed software takes control of their system and gives them complete access to all their information. Thus, it’s recommended to have updated anti-virus software installed in the system, that protects the system from such scams and phishing attempts.

Despite the fact that the bank organization and the concerned government make people aware that credit reports are issued once in a period of twelve months from time-time, still, there are cases where the users fall into the traps of unsanctioned websites that claim to provide a free copy of credit reports. Such websites ask for sensitive details like Social Security Number (SSN) and Date of Birth (DOB), which makes it easy for them to get access to the user’s account. Thus, it’s highly recommended to users to never respond to such websites and verify that one is accessing a legitimate URL, before entering any such personal details. In addition to this consulting a data scientist is a great option to choose in this case.

Did you ever receive emails stating that one has won a lottery prize and needs your assistance in receiving the prize? Well, we bet you surely would have received such emails and these would have found space into your spam box! These are actually called Beneficiary Email Frauds and in this case, the scammer sends an email to the victim, claiming that they are struck with a big amount and they need someone’s help to facilitate the transfer of funds. However, identifying such scams is easy, check out for grammar mistakes, spelling mistakes, and email domain.

How Data Scientists in India can protect your Data?

One of the job roles that is performed by the Data Scientists in India is to protect the user data and add data security verticals across the different domains in the organization. Hereby, there are some of the ways one can secure their data, as per the suggestions of some of the best data scientists in India.

As per the suggestions of some of the best data scientists in India, one can keep all their data safe and secure by encrypting it. By this, one can maintain the confidentiality of the data, even if it falls in the wrong hand, as they would not be able to decrypt it, without having the required set of details

Next in the list, other than the above-stated preventive measures, the data scientists from some of the best data security companies in India believe that educating employees about cyberattacks and preventive measures are very important. Employees must be educated about unsecured networks, restricted websites, and must be made aware of which link they should click and which not to click over!

Have a Recovery and Backup Plan

Since, it is said that prevention is always better than cure and hereby, data scientists in India believe that one of the preventive measures is maintaining a backup of the data and have a well-defined recovery plan in, such a way that in the case of cyberattacks or data loss, one can retrieve the data easily.

All in all, Cyberattacks may keep on rising like never before, but what one can do here is that taking preventive measures into account, like educate the workers, consult a data scientist, avail cyber insurance, keep the system password-protected, and data encrypted. In addition to this, there are some of the best data security companies in India, like Clover IT Services, which promises the best data security services for all the business domains.