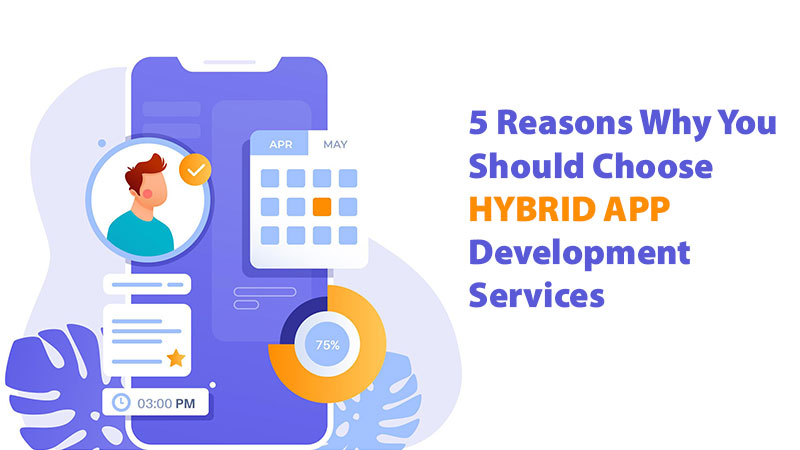 Do you know why do we call our mobile devices, smart? Well, it’s all due to the fact that it serves as a great platform for a variety of applications, which makes it easier and convenient for the users to access a variety of services with a few taps! In regards to these mobile apps, there are several mobile app development methods and mobile apps that are available today, and hereby, one can pick the “Hybrid App Development Services” due to a great set of benefits that it offers! Taking this further, here we will be talking about the 5 Reasons why one needs to choose Hybrid Mobile App Development Services in India. In addition to this, we will be talking about some of the best hybrid app development companies in India.

What do we mean by a Hybrid App?

Well, unlike the native apps which are built to work over a particular mobile platform like iOS or Android, Hybrid apps are built to function equally well over all the platforms which are iOS, and Android. Keeping up with the best features of the native and web apps, we have Hybrid apps that are actually web apps with the benefits of native apps. This means that hybrid apps might have a home screen app icon, faster performance, responsive design, and even be able to function offline. These apps are built using a mixture of web technologies and native APIs, like Objective C, Ionic, HTML5, and Swift. These apps are thereby economical and easy to build due to a single code base, and less maintenance cost, and this is why there remains a higher demand for seeking Hybrid Mobile App Development Services in India.

How does a Hybrid app works?

In regards to the working of a hybrid app, it is developed using any of the two available options- Flutter and React native which are very popular cross-platform frameworks that allow the easy creation of apps for both Android and iOS platforms.

Why do you need to seek Hybrid Mobile app development services?

Now if you have been wondering how by seeking Hybrid Mobile App Development Services in India, you could save impressively over the mobile app development cost, then consider a scenario, where you have been looking for an app that runs well for an Android or iPhone. In this very situation, you will need to have an app that is developed separately for both these platforms. The developers will need to use the Native Development platforms for developing such an app separately for Windows, iOS, and Android. But, how if one gets an app that is fully functional across multiple platforms, such as a hybrid app? Surely, it would be a great thing! It is fully compatible with individual platforms and that’s the reason why hybrid app development is economical and proficient in all terms.

Where can one find the best Hybrid App Developers in India?

From scrolling down a number of products to availing a number of services, mobile apps have simplified the entire process. However, if we talk about its usability from the business perspective then, we would definitely remain a bit worried about its cost! Sometimes, tight budgets can also affect our decision when it comes to seeking Mobile App Development Services in India, as it may cost higher if the right mobile app development services are not taken into consideration. Likewise, one can choose the Hybrid Mobile App Development Services in India, and in regards to this, they can find some of the best hybrid app development companies in India, like Clover IT Services.

Overall, by seeking Hybrid Mobile App Development Services in India, the users enjoy the privilege of using the same app over multiple platforms such as Android and iOS. At the same time, it lets the developers convert the existing web pages into the app screens, without finding a need to create new pages for an App, which saves a lot of time and costs very less. So, if you are someone who has been considering the mobile app development services from the business perspective, then, among all the available options, hybrid apps will promise you speed, user-friendly UI, and convenience at an effectively lower price, that you can easily bear, even if you are tight on budgets!