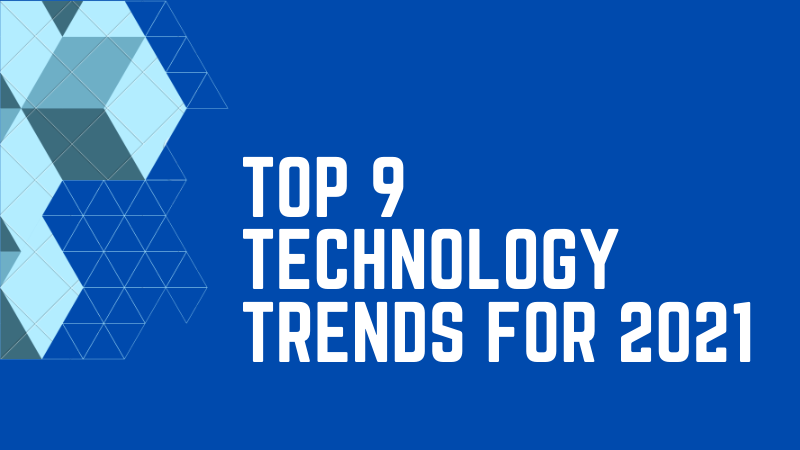 As we are progressing towards a new generation, whereby, more efficient and better technologies are being introduced, but, hereby, one finds it quite difficult to predict which of these technologies is meant for their business and which of these are most likely to remain in the limelight for longer! Taking this into consideration, here we are going to talk about the top nine technology trends for 2021 and further years! In addition to this, we will be talking about the best IT companies in India that offer the best technology solutions for today’s businesses.

Today, the traditional television platforms are being rapidly replaced by more efficient, convenient, and resourceful online streaming platforms like Netflix, Amazon Prime, and others! But, have you ever thought about, how are these platforms able to process massive amounts of data efficiently and securely? Well, hereby, Cloud Computing proves out to be one of the most promising technologies, that holds immense potential to change the way data is processed! It besides making it more convenient, also ensure safety! Thus, some of the best technology consultants in India believe that Cloud Technology will remain among the top trends in 2021 and further. In addition to this, IT experts believe that besides finding applications across the online streaming platforms, this technology is most likely to change the way corporates used to work! It would bring the “Work from Home” culture more pronounced for the years to come!

If you are those, who fantasize about exploring things more lively and conveniently, then, Augmented Reality is the aptest concept that is defined here! It besides changing the way one interacts with a technology platform, but, also makes it appear more lively and interactive. As per some of the best IT companies in India, Augmented Reality is the next most pronounced technology that would rule the market in the year 2021 and further! It is believed that this year and further, AR App Development Services would remain in great demand across all the business domains. In addition to this, Augmented Reality has immense potential in assisting with virtual tours, enhancing the user experience, and making technology more perceivable.

Well, across all the technology trends, the Internet of Things (IoT) has remained the biggest hits of all time from the past several years. It not only holds immense potential to change the way we live and the way we interact with the things around us but also makes the internet services defined at a broader scale. With an objective to connect every device to the internet, some of the best IT experts in India believe that IoT has a great potential to streamline the processes across all the segments and help people live a more comfortable life.

Remember the hype gained by the world’s first digital currency Bitcoin? Well, it not only remained as one of the biggest discoveries of all times! Since then, researchers started exploring the potential of the technology behind it, called Blockchain Technology! Lately, it was discovered that blockchain technology has a great set of applications beyond the digital currency format, and it was found that Blockchain has immense potential across Gaming, Auditing, Banking, Insurance, Education, Healthcare, and Manufacturing sectors. Thus, technology experts in India, believe that blockchain technology will not only rule in the year 2021 but also in the upcoming years!

It’s the VR technology, which made the concept of virtual tours a reality! It changed the ways we used to explore places and made it clear that for exploring something, we need not create things physically, instead, we can add the simulation effect to it! Hereby, IT experts in India, believe that Virtual Reality will remain among the top technology trends in 2021 and further!

As the things are getting more conceivable via the powers of the internet, the risk of getting scammed by cyber attackers is getting bigger! Hereby, the data scientists in India believe that cybersecurity will remain among the top trends in 2021.

From the past few years, the telecom industry has gone through significant transformations and hereby, the 5G network will stay among the top technology trends in 2021. This will not only mark as the beginning of a new digital era, whereby we will be having faster internet services but also, reshape the digital economy of a country.

With the introduction of online mobile shopping platforms like Myshoppy, which empowered the local vendors to open their online store within 24 hours, the M-Commerce segment took over the pace and proved out that it will flourish in 2021 and find a place among the top trends this year and further. As per the M-Commerce experts in India, it is believed that the demand for seeking M-Commerce services will remain among the top trends in 2021 and would make retailing more efficient and convenient.